Gateway Investment Partners was selected by the Cleveland Clinic to develop a new hotel as a part of a ground lease transaction with the Clinic. The Cleveland Clinic currently owns the InterContinental & InterContinental Suites, both of which are operated by InterContinental Hotels Group (“IHG”), and previously also owned a third hotel, known as the “Guest House”, which was shut down in August 2013. The Clinic had a desire to have hotels at all price points for their patients and guests, and as such, they wanted to replace the closed down Guest House with the Holiday Inn hotel to be the low-cost option for the guests.

Since shutting down the “Guest House” the Clinic had to turn away 5,000 rooms a month to other hotels in the area.  The Holiday Inn will help fill that gap.  As a result, The Cleveland Clinic, which generated $6.5 billion in revenue in 2013, provided a room occupancy and rate guarantee, reducing substantial risk from the investment profile of the deal.

The hotel is currently under construction with an anticipated opening in Q2 of 2016.  The 174,000 SF hotel will be the most upscale and modern Holiday Inn in the country.  It will include a two-story lobby that extends into a 125 seat bar/restaurant, an indoor pool, exercise/fitness room, 1,300 SF of meeting space and a large outdoor patio area with multiple fire pits. 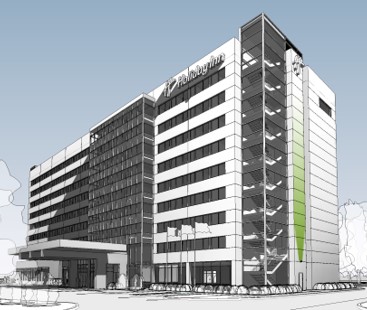